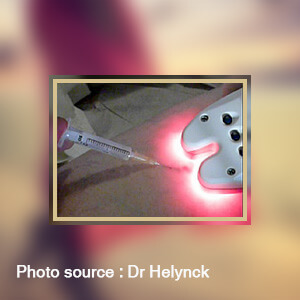 Advances in the treatment of varicose vein, varicosity and telangiectasiae 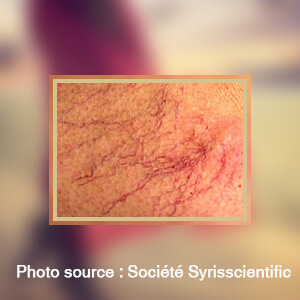 Sclerosis is the injection of a specific product that induces a shutter and a retraction of the varicosities that may fibrosis and will disappear completely and permanently, or may retract enough to no longer be visible.

The improvement and development of instruments used to better see the varicosis and its supply system is invisible to the naked eye and implements a new therapeutic strategy.

This strategy is to see and treat in the first and deepest source of visible varicose veins, and make this "underground" work at all levels before reaching the surface.

These new tools are: 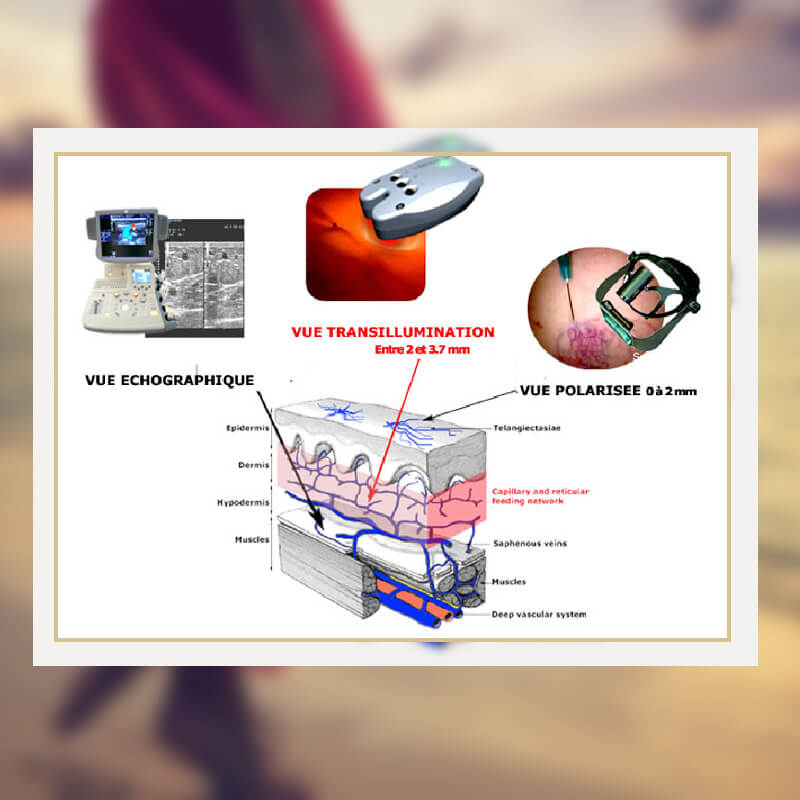 Ambulatory sclerotherapy is done in the doctor's office during a session that lasts 10 to 20 minutes. A number of sessions are usually required depending on the size of lesions and the degree of perfection desired for a better result. 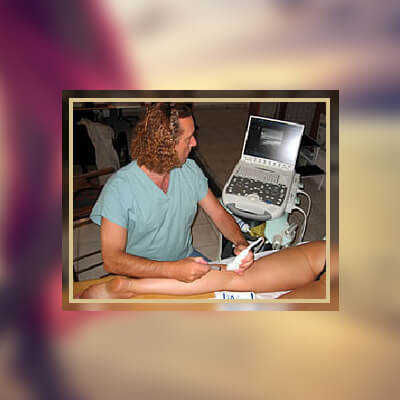 Sclerosis of a varicose vein is the injection of a sclerosing agent which seals and retracts the vein.The treated vein can fibrosis or disappear completely, may also retract sufficiently to give a good appearance and result.

One can thus verify and make sure of the injection with certainty, control the quantity of the product injected and its distribution, and observe the immediate reaction of the vein.

Sclerosing foam is manufactured just before the injection with emulsion sclerosing air-product (there are several sclerosing products available).

The better indication and comparison to the same products in their liquid form which can also be injected are:

Completely ambulatory sclerosis with ultrasound is done in the doctor’s office during a scheduled visit which can last up from 10 to 20 minutes. Between 3 and 5 appointments per vein are usually necessary, spaced in time from 1 to 3 weeks. It is generally painless and allows normal activities immediately.

It occurs within two or three days and does not require any particular care.

A bruise at the injection points is possible taking into account the bad quality of the walls of the veins.

If an inflammatory reaction is a little more important, a pain can be felt on the trajectory of the injection and requires an evacuation during the following visit in order to eliminate the accumulation of blood wedged during the process of fibrosis, thus avoiding the appearance of possible traces of pigmentation or varicosities.

A compression will be applied or not at the end of the session to kept on for more or less a long time.

It is necessary to avoid excess physical-activity on the day of the injection but one can renew with every day activities. Not to hesitate to inform the doctor of all persisting pains or in case of a doubt.

As for any type of sclerosis an incident may be possible.

They are rare and always the same for different types of sclerosis.

Recent studies have shown that echo-guided foam sclerotherapy have better results than other treatments.

An annual check-up is important for better results and the prevention from recurrent illnesses.

Particular: the “ideal” indications of the echo-guided foam sclerotherapy are :

Echo-guided foam sclerotherapy may be combined with other techniques.


Of echo-guided foam sclerotherapy : they are all related and to be considered case by case: 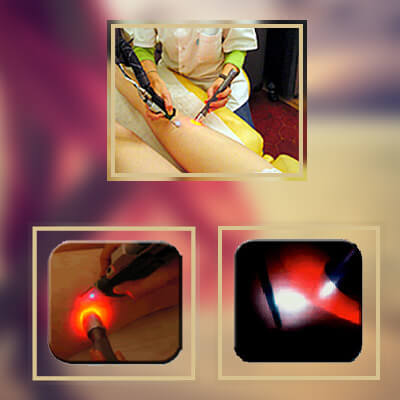 Extension of the treatment with a laser on the reticular network accessible for an in-depth performance.

The laser is a coherent light beam which makes it possible to selectively deliver the energy emitted to precise structures located on or under the skin (chromatophores: hemoglobin, water, pigment, etc.) as a function of the chosen wavelength.

Two different laser types of wavelength 720 and 980 nm are used for the treatment of certain varicosities and telangiectasias.

We speak here of exo-venous laser because it is a question of treating the diseased vessels by heating them by external application on the skin of the laser light, as opposed to the endovenous laser (see below) which consists in heating fat Veins through the interior thanks to a guide introduced under ultrasound.

In all cases, these exo-venous lasers can only treat superficial vessels of moderate to small size.

They are very well indicated also for ruby points, birthmarks…

The "ground", the food, the deep varices must imperatively be treated beforehand by the endo-venous surgery, the phlebectomy or the sclerosis under ultrasound as the case may be.

The most voluminous varicosities and telangiectasias are then treated by sclerosis or micro-sclerosis before the laser that complements last most often.

The laser used alone leads in most cases to failures or even worsenes compared to the initial state.

The techniques of transillumination and polarized light are used (see below) as for micro-sclerosis to improve the efficiency of exo-venous laser treatment to a considerable extent.

The laser thus comes in addition to other techniques for an aesthetic purpose, its interests are: 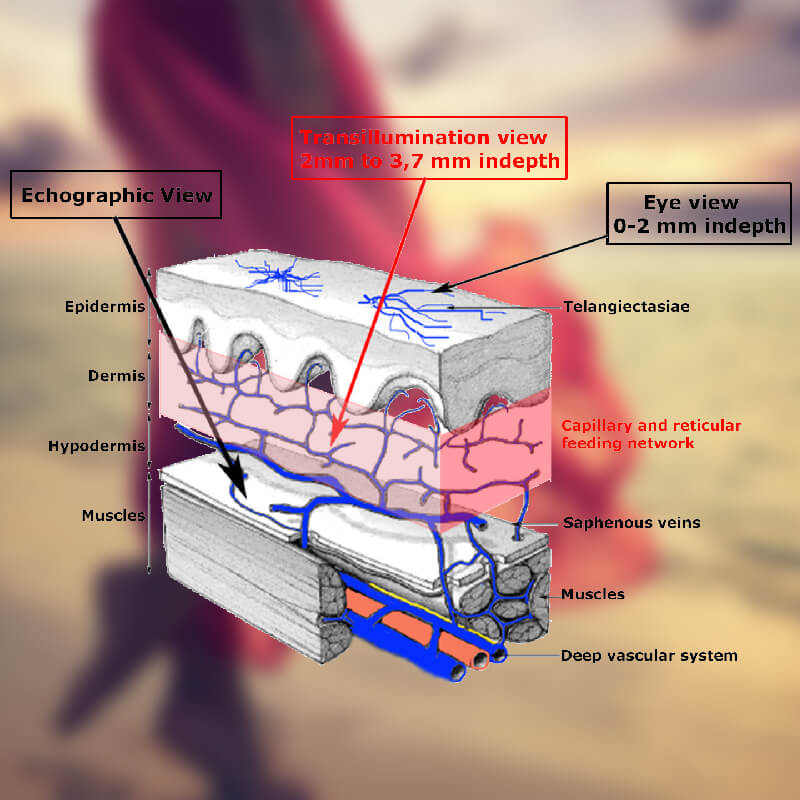 Aim of the technique:

Transillumination of the skin allows the difference of refraction and absorption of light to reveal structures beneath the skin not visible to the naked eye.

Its goal in vein treatment is to highlight subcutaneous structures in the first millimeters of the dermis (between 2 and 3.7mm), where much of the superficial venous network is: varicose veins, varicose networks and reticular feeding veins and telangiectasia visible on the surface.


Apply to the skin the specific apparatus that produces a highly monochromatic red light (650 nm), which "penetrates" deep into the dermis.

irectly observe the structures that appear or are specified by the lighting device.

The institute of the leg has developed a tool to help in marking: The Venolux

More information about VENOLUX on the site here.

It is shown that the ability to penetrate the skin is directly related to the device and the type of skin which might be more or less transparent, observable depth up to 4 mm (see publications at the end of the page). 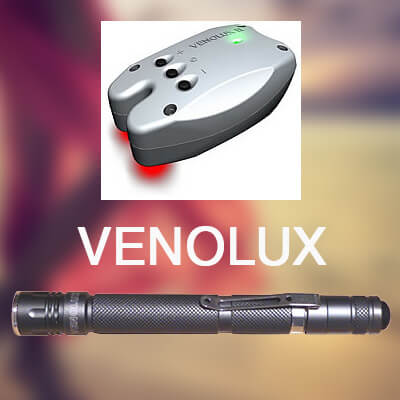 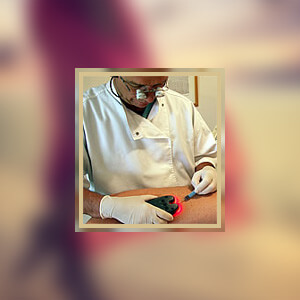 Under transilumination, performed simultaneously, either free hands, standing or laying down. 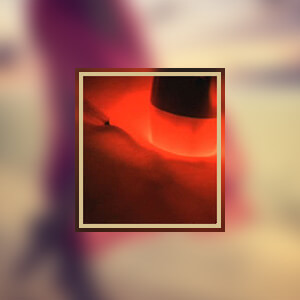 Follow-up of the sclerosing agent in the vein. 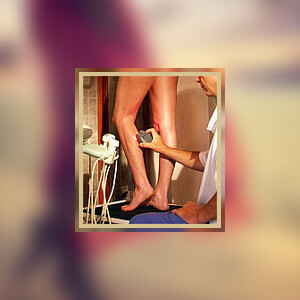 Improved precision of diagnosis an prognosis. 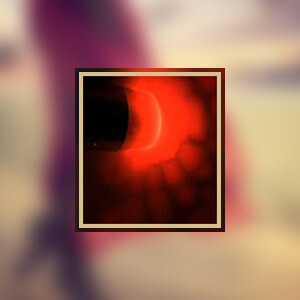 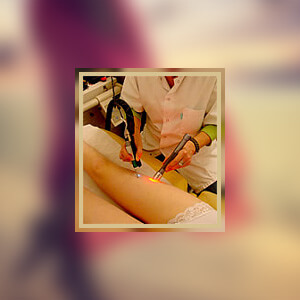 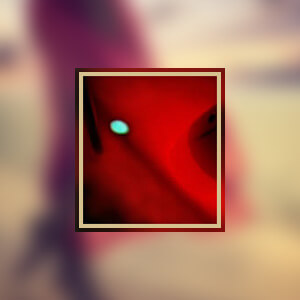 Immediat readjustment of laser beam parameters and control of the result. 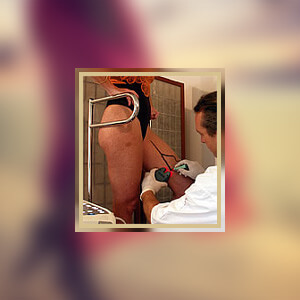 Transilumination allows pre-surgery mapping to be performed patient standing or laying down. 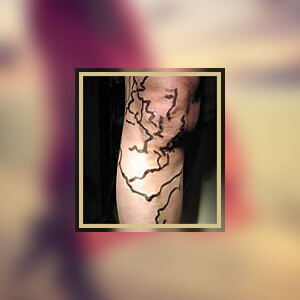 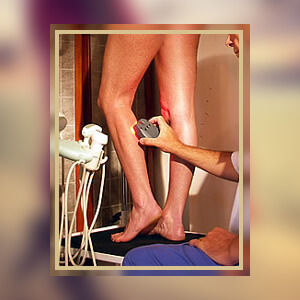 The first consultation of phlebology at the end of which the diagnosis and the therapeutic strategy are established is carried out on a stool of phlebology.

Interest of transillumination in the diagnosis:

For the doctor: Complete diagnosis between simple view and Doppler ultrasound.

For the patient: Measure the true extent of his pathology, greater acceptance of treatment, better adherence to treatment.

The goal is to demonstrate the subcutaneous structures not visible to the naked eye located in the first millimeters of the dermis (between 2 and 3.7 mm) where the reticular system of feeding of the apparent unsightly varicosities is located on the surface. 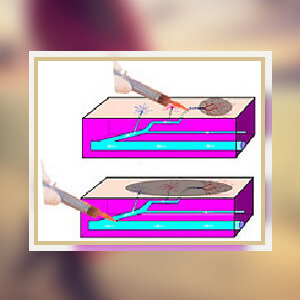 We first sclerotize the deepest feeding networks, the "sources" of the apparent vessels with a single or a reduced number of injections for a larger area of ​​varices treated by injection.

We first sclerotize the drainage veins directly responsible for telangiectasia.

The sclerosis product is injected under the control of transillumination simultaneously without prior marking in order to verify that the injection is done well in the vein and to follow the diffusion of the product.

The same leaching effect of the injected veins is observed as that observed in the sclerosis under ultrasound. Removal into the syringe can be done with one hand, but is mostly unnecessary. The characteristics of the device make it easy to carry out this gesture without parallax error.

Sclerosis is completed by sight when all feeds have been injected. 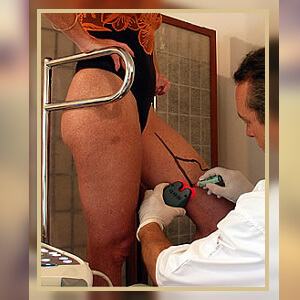 Interest: The preoperative marking of a varicose system is intended to identify for the surgeon the key points that can help in his statement.

The surgery is then more precise, more efficient and with simpler sequences.

Procedure: We examine the patient standing and lying down, marking is first performed only under transillumination without gel or other product contact all accessible structures, it is then pursued by the usual technique of ultrasound guidance depths and Varicose veins.

Between clinical examination and doppler ultrasound

The perception of marking.

The speed of execution of the marking (x2 or x3).

New contributions in the practice of transillumination

We propose new contributions of transillumination in phlebology in terms of material and how to use it.

We use VENOLUX *, an original and efficient transillumination device, specifically adapted to phlebology because it has been developed thanks to our daily experience for capturing information located more deeply in the dermis, a kind of "missing link" between the simple View and data provided by ultrasound.

For example, pre-operative phlebectomy or stripping markings are significantly improved and simplified at the same time.

These improvements allow us to evoke a new concept in phlebology: preventive or anticipatory treatment of varicosities and telangiectasias.

We conclude that the advances made in the use of transillumination with VENOLUX * are a very interesting contribution in the fields of diagnostics and therapeutics in phlebology.

We present a study on the depth penetration capacity of transillumination in phlebology according to skin type (Fitzpatrick classification), material used, vein size, depth, epidermis and dermis thickness, and The depth of the underlying aponeuroses.

The results show that the depth resolution capacity with the best currently available material is directly related to the Fitzpatrick skin phototype and ranges from 3.4 mm for type 1 to decrease linearly to 1.5 mm for type 6 on average.

No correlation was found with the other parameters studied. We show the fields of action of the examination by the simple sight, the transillumination and the echo-Doppler for the study and the treatment of the superficial venous system.

We conclude that, due to the technical and practical characteristics of high frequency ultrasound and the useful field of transillumination with the adapted equipment, the two techniques are exactly complementary both in the field of diagnosis and preoperative marking and Of that of therapeutics by sclerotherapy. 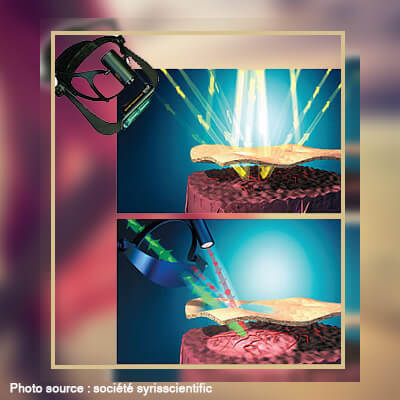 By separating the different components of reflecting light, the device provides an improved view under the skin and the skin surface.

Using a polarized light source combined with polarized lenses, it can easily separate the two components of reflecting skin.

With the cross-polarization of the light source and lens vision, the component is identified, producing a better vision beneath the surface of the skin.

When the source of polarization and the receptor are parallel, the components on the surface such as texture, scale and wrinkles are increased.


It is done perfectly through transillumination after the removal of deeper sources (in the first 4 mm under the epidermis) of varicose veins.

The interpretation of images and use of the device requires a great habit and a good understanding of the art micro-sclerosis in the basement. 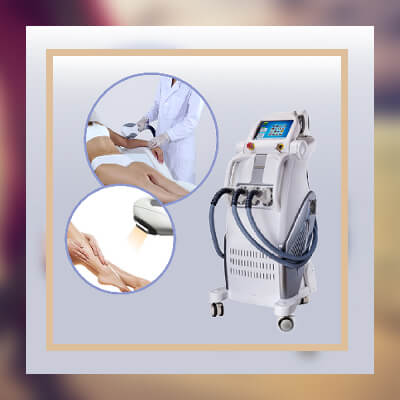 We use 980 nm diode laser technology in addition to or parallel to microsclerosis for facial vessels or other parts of the body, especially when these unsightly vessels are blue in color.

The IPL comes in complement or parallel to the sclerotherapy when it is very thin vessels and spread over large surfaces.

These two advanced Laser and IPL technologies, when combined with microsclerosis, achieve levels of results close to 100% of eradication of varicosities, telangiectasia, and couperose.

It should be remembered, however, that chronic venous disease in all its forms, from the largest varicose veins to the finest telangiectasia, is a congenital fragility more or less important according to the people who can not be stopped at the present time.

The result obtained is therefore not definitive, it asks to be maintained as regularly as possible according to a rhythm to be determined on a case by case basis.